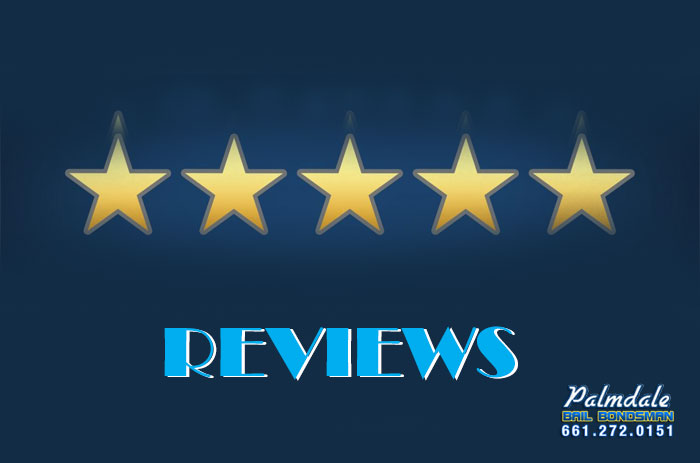 Thank you for answering all the questions we had. We called around many places and this is one that i remember to have great customer service. At the end of the process we didn’t need bail anymore, which was a relief. Thanks for everything!

We had a great experience using palmdale bail bondsman. not only are they easy to work with but are also very convenient when it comes to meeting up with you. I called and started the process to bailing out my sister over the phone. After our agent, tamara, met us at local starbucks (close to my home) to finish the paper work. Tamara posted my sisters bail and she was released within a few hrs.

Thank you for the great service provided. I am not going to lie i like to sit there and shop around, but i love the fact that even though she knew i was shopping around she was still able to provide me all the necessary information…….especially after i asked a million questions. Thanks!
Anna Perez

Thank you for answering all our questions. The customer service was really great connsidering i called multiple times. Robert was very professional and friendly. Although i did not end up using them, i must give them the recognition they deserve on the service. A big Thumbs up!!
Chuy Hernandez

Thank you Sam for being such a great agent! You really went above and beyond to answer all the questions we had. I really appreciate the fact that you offered us a discount, not all compnies go straight to help you out and you guys did. Thanks for everything!!
Arabelle Chaidez

My brother got arrested last night and called Palmdale Bail Bondsman this morning. I just want to thank Erika for her quick actions, at the end we didn’t have to pay and she still treated me with dignity and respect.
Jannin Arenas

Thank you for giving us the opportunity to bail out my sister. Although at the moment we will not be needing bail anymore, I wanted to commend you for a great job. Thank you Destiny for everything!!
Crystal Hernandez

Thank you for Brisa for taking the time to call us back. We appreciate you sitting down with us and answering all our questions. Your service deserves recognition. Thank You!
Maria Meza

Great service!! Tamara was really helpful with the questions we had. She found our cousin real quick. They even gave us a discount due to AARP. I called another place and they were not very communicative. So i decied to go with this company. Thanks again!!
Henry Fogle

“Good service, and helpful bail agents. I received all the information needed to bail my friend out. The process was rather easy.”

Thank you for the kind service, we appreciate your staff being able to answer all our questions. FYI every county is different………something we learned. Even though we have gone through this process before you always learn anything or 2 new about it. The key is also to keep up with your court dates! Thanks for everything!!

“Thank you Palmdale Bail Bondsman & Bail Bonds for the friendly service! They gave us a discount and everything, because we had AARP . I was so happy that they went out of their way to help us understand the process. The only bad part was the arrest .call them they won’t let you down”

“So my cousin had a little too much fun this weekend, one thing led to another and we had to bail her out. We called around and Becky from Palmdale Bail Bondsman & Bail Bonds was able to help us out fast! She explained to us how the process would take into effect. I would recommend them to anyone in need of bail. She also said they would be able to remind us of the court date which is really helpful 🙂 ….so happy to have found them!”

“Very good service! They do everything they can to help you. The service provided was fast and friendly. I would definately recommend Palmdale Bail Bondsman & Bail Bonds to anyone that needs bail. Natalia was very helpful! Thanks again.”

“when my brother was shockingly put in jail I didn’t have the money to post his bail. So I was refereed to the experts at Palmdale Bail Bondsman & Bail Bonds. I thought that do to my financial state I wasn’t gonna get help.But they really made me feel comfortable and it was an easy process. they also worked with my financial status.”

“we came to them after we had gone to another bailbonds they were really rude n looked like they dint know what they were doin we left came here total difrent storie they worked with us since we walked in were nice n helped out allot we dint have that much of money but they were able to work with us there so nice , fast and affordable i would recommend to all my friends n fam. thanks”

“This guys knowledge and professionalism was way more then I expected. He was even able to tell me a little about the judge my friend was going in front of. Great service during a difficult time, thanks.”

“I’m very thankful to everyone at Palmdale Bail Bondsman & Bail Bonds for taking care of our needs in such a professional & timely manner.”

“After being pulled over for broken tail lights. I was handcuffed and arrested for a warrant I didn’t know I had. My wife went to Palmdale Bail Bondsman & Bail Bonds. They were kind, polite, & explained the process in terms for her to understand. They got me out quick, fast and in a hurry. I was able to return to work and not lose my job. I am the sole provider for my family. Thanks to Palmdale Bail Bondsman & Bail Bonds for keeping my wife’s stress down during an overwhelming situation.”

“I had no idea what I was doing in this situation and after calling around, I was starting to get a bad taste in my mouth about this type of service. I called Palmdale Bail Bondsman & Bail Bonds at around 11:30pm. I spoke to John, had a heart-to-heart with him. I had 3 children at home in bed and he offered to not only assist our family, he offered to drive to our house and write up the paperwork immediately. Palmdale Bail Bondsmen and Bail Bonds took a chance on me and for that, I am thankful. The urgency they created to help me out is the only way a business should be run. I will definitely be paying this wonderful gesture forward. Thank you again.

“John, I just wanted to say thank you for helping us out with my brother’s most unfortunate situation. Your professionalism and quick service helped easy the stress we felt of this terrible event. I would highly recommend Palmdale Bail Bondsman & Bail Bonds to all those in need of a bondsman.”

Amazing people to deal with. I don’t usually write a review but they went above and beyond the call of duty. Natalia was very helpful and knowledgeable. Her great knowledge of process and network has made it an unforgettable personal experience. She took her time to explain details about posting a bond that I had no idea about.

I am happy to provide my feedback on your bail bond service. It was great!!! Not having to use this kind of service before, Becky was kind to guide me through the process. She was there to answer the phone when I called, and it was way after normal business hours. I hope I do not need your services again, but if I do, it will be your company I call. Thanks again Becky for being there when we needed help.

Customer service was helpful and informative, was provided with all the information i needed. Bail agent was on time and friendly.

The customer support was really respectful of my whole situation and was able to help me quickly. I was terrified about dealing with this personal situation and these guys helped me with some of the best service I could ask for. I would definitely recommend Palmdale Bail Bondsman & Bail Bonds to anyone!!!!!!!!!!!