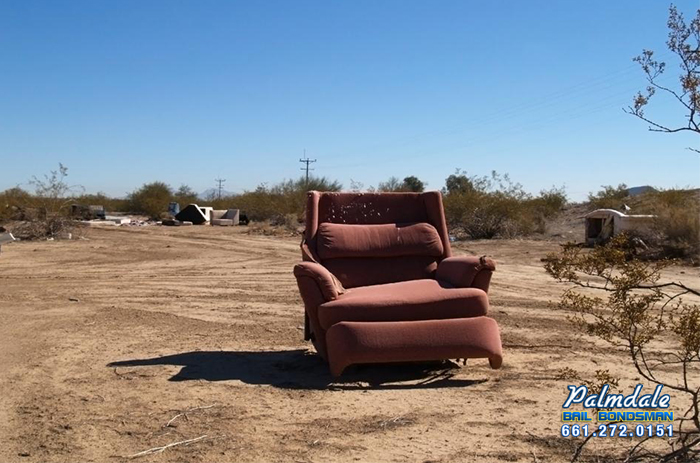 Nobody wants to look at piles of garbage on the side of the road, or anywhere else in their city, which is why the act of leaving that garbage there is illegal in California. Anyone caught dumping their trash where they shouldn’t will face legal consequences.

Here in California, Penal Code (PC) 374.3 is the law that makes the act of dumping waste products illegal in the state. Under this law, if someone dumps waste in one of the following areas, they are guilty of illegal dumping:

Basically, this law makes it a crime to dump stuff anywhere but on a person’s own property or in an official dump.

On top of laying out the areas where a person cannot dump trash, PC 374.3 also defines what counts as waste products that can’t be dumped. The law doesn’t only focus on obvious bits of trash, the actual wording makes it a crime to dump waste. It goes on to describe what counts as waste:

The breaking of PC 374.3 is an infraction level offense. This means that the consequences do not include any jail time. A person guilty of illegal dumping will face a small fine. The amount of the fine is dependent on how many times the person has been charged with illegal dumping here in California and their criminal record.

What’s more, a person can face additional charges for each day the waste remained where it was dumped. This means that the penalties for this offense can increase drastically.

On top of that, fines can be doubled if even a single used tire was included in the dumped waste. The court can also make it so that the convicted individual has to pay for the removal of the waste.

PC 374.3 also makes it a crime to illegally dump commercial quantities of waste. This same rules apply as above, except the quantities of the dumped material could only be generated by trade, business, profession, or occupation. If a person, or company, is guilty of commercial illegal dumping, they will face misdemeanor charges that come with up to 6 months in jail and a fine based on how many times the person has been convicted of commercial dumping.

Keeping the City and the State Clean

When a person has any waste that they want to get rid of, they need to take it to an official dump. If they just try to dump it somewhere else to avoid paying a fee, they will end up in trouble with the law. From there, they will end up paying fines that make the dumping fees much more agreeable.

If a person sees dumping activity, they should report it to their local authorities. Even though dumping is a crime across the state, it is handled at the county level. Different counties handle the crime differently, with some caring more than others. Still report the incident so that there is a record of it.

Everyone wants the city they live in to look nice and to not be covered in dirt and trash. This is why the state has outlawed the act of dumping waste wherever a person wants. What do you think of the state’s dumping laws? Are the penalties equal to the crime? Let us know what you think in the comments down below.

consequences of trash dumping, dumping trash on private property, fines and penalties for trash dumping, it is illegal to dump trash on road ways, what is considered illegal dumping